To give you a flavour of my book Global Raider here is the final extract from Chapter 2.

Jake sensed the surge of adrenalin which caused the glory-bound excitement he had discovered when a a mere captain in Iraq. Direct persuasion, he liked that term. Old man Walsh would have been informed of his daughter’s situation immediately and a helicopter would now be transporting him from Philadelphia to Walsh Towers in New York.

“General, this is Navro.” The man spoke over air transmission. “I just flew past attack point. No accident, no police, no ambulance.”

“I read you, Navro. Trace now passing under the freeway and skirting South Weymouth airstrip. They’re heading for the woods. My guess is, they got a chopper somewhere. Take highway five three. I have a wager we retrieve within fifteen minutes.”

“What’s the situation, Jake?” Wat Walsh’s voice cut in on the general’s headphones.

“Sweetpea now on red six minutes, forty-five seconds. Tracker beam gives a moving target. We have three choppers in the air and closing.”

“Is this code red for real? What the hell’s happening, Jake?”

Juliet had lost her scream and was losing her strength as she struggled between two women. A third cut the gold chain from her neck.

The bedlam of noise from sirens and the shouted commands of her attackers were joined by the hacking thump of approaching helicopters. Juliet jabbed a bare heel into the stomach of one assailant, causing the woman to stagger. The others began pulling at the tracker bracelet.

With the under-slung searchlights of three helicopters on full-beam, Jake gave orders for each machine to fly parallel either side of the road, ensuring their quarry had no way to escape, holding the ambulance in a cone of moving light. Highway five three had taken them deep into open country. He saw no other traffic; no lights.

“Navro, go forward and use your beam to block the road. The moment they stop, we hit.”

Jake watched the S-76C lift higher and swing forward in a wide, sweeping arc. A mile ahead it hovered feet over the road, both searchlights directed onto a single blinding cone centre of the highway.

Beyond the windscreen Juliet saw the road become a dazzling circle of brilliant whiteness. The driver was screaming out his panic, jabbing the brakes, toppling Juliet into a jumbled heap of sprawling bodies. Moments later she felt the ambulance bounce off the road, its nearside wheels furrowing downwards as it tipped over.

Looking up through the windows from where she lay, she saw the night sky change to an incandescent glow of multi-coloured lights as men abseiled from hovering machines. Within seconds, the ambulance door crashed open and she was dragged out with the others, all of them thrown spread-eagled in the dirt. The noise of machines and shouts rammed into her head, obliterating any rational thought. Hands searched over her body, which was then lifted and bundled between a crush of men who hurried in close order from the ambulance and her abductors. She had no idea if she was saved or caught by others; to live or to die. Everyone was shouting; no one listened to her protests. She could distinguish nobody’s face or make sense of what they did. Against her will she began to cry. Didn’t they realise Lisa was dead? Away from the helicopter they placed her on the ground and left her on hands and knees while the squad of men returned to darkness.

“Hostage secure, sir,” someone shouted behind.

“Twelve minutes, twenty-two seconds. Well done, Juliet.” General Hammerton came out of the shadows and offered his hand. “No need to cry, you’re safe now. My God, you did well. Your papa will be proud.”

“They killed Lisa. They put a sack over her head and shot her.”

“Navro,” the General called on his handset. “Get your ass down here. You got a passenger for New York.” General Hammerton clasped her arm, leading her towards the S-76C as it settled on the road, the downbeat thrashing at her skirt and hair, whipping road dust to sting her face.

“Lucas, what about Lucas?” Juliet pleaded, wiping her eyes.

Juliet wanted to explain but stopped as the helicopter door slid open. In the flutter of light there was no mistaking the lithe figure who leapt from the interior, running towards her with arms wide.

“Baby, oh my baby. What have they done to you?” Lisa swept her into a hug.

Juliet buried her head against the warm and comforting body, pressing her face and her tears. “I thought you were dead; I thought they’d killed you.”

Arms around her shoulders, Juliet allowed herself led to the helicopter. “Who were they?” she asked. “What did they want?” 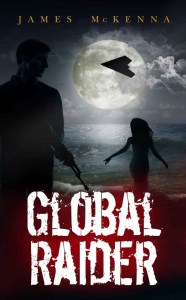 The next extracts will be taken from my book The Unseen, starting on Saturday 5 September. In the meantime take a look at my author’s page on Amazon http://tinyurl.com/q2ta3z6